In the framework of their campaign #StopTheToxicDeal RSA and PRO ASYL publish today the final topic that concerns Turkey as a “safe third country”.

The implementation of the EU – Turkey Statement (the “deal”) had toxic and painful consequences not only on the lives and rights of refugees arriving on the Aegean islands, but on the rule of law itself. The launch of the “deal” on 20 March 2016, also marked the launching, for the first time at the national and European level, of an experiment on the application of the “safe third country” concept to all incoming refugees on the Greek Aegean islands, aiming at their readmission to Turkey.

In order to achieve the political objectives of the “deal”, the Greek authorities, encouraged by the EU, adopted in April 2016 a series of legislative changes to asylum procedures (Law 4375/2016). At first, they introduced the “super” fast track border procedure which provides limited procedural guarantees. At the same time, the Asylum Service begun, for the first time, to examine the admissibility of asylum claims lodged by Syrian refugees arriving on Aegean islands, on the grounds that Turkey is a “safe third country”. Based on this legal ground, Syrian refugees’ claims were routinely rejected by the Asylum Service following a relevant opinion by EASO – which conducts the first and only asylum interview. It should be noted here that the review of the “admissibility” of these claims begun without first having ensured the basic procedural guarantees and defined the methodology for the third country (Turkey) to be designated as safe. In June 2016, the non “compliance” of Appeals Committees – the majority of which was deciding at second instance that Turkey was not a “safe third country” – quickly led to the amendment of the recently adopted law and the creation of new Appeals Committees with a different composition (Law 4399/2016). These new Committees began to regularly conclude that Turkey was a “safe third country” for the applicants.

THE GREEK ASYLUM SERVICE AND TURKEY AS A “SAFE THIRD COUNTRY”

So far, designating Turkey as a “safe third country” is mostly based on general assurances provided by the Turkish Authorities to the EU and on letters by the EU and UNHCR to Greece. It is to be noted that the content of the UNHCR letters to Greece was misinterpreted in the adoption of relevant asylum decisions. Still UNHCR did not take steps to ensure that these letters were properly interpreted, while, at the same time, it remained silent during critical moments regarding the interpretation of the concept of “safe third country” by Greek courts.

The reality in Turkey, as depicted in credible reports of the Council of Europe and national and international human rights organizations, has been systematically ignored by the Greek Asylum Authorities and by the EU itself.

In September 2017, Greece’s Highest Administrative Court (Council of State) in its pivotal decisions (2347/2017 and 2348/2017) upheld the assertion that Turkey is a “safe third country” for two Syrian refugees and “paved” the way for forced returns of refugees to Turkey, under the “deal”.

These decisions are a step backwards in jurisprudence and the standards of refugee protection in a rule of law. Nevertheless, they shaped the Greek courts’ jurisprudence so far and strengthened the decisions of Appeals Committees, which continued to designate Turkey as a “safe third country” for the Syrian claimants. Lastly, they left a bitter sense of frustration towards justice and the rule of law. More specifically, the Council of State scandalously confirmed that the general diplomatic assurances provided by the Turkish authorities in the context of the “deal” constitute sufficient elements for the Greek authorities to decide on whether to apply the principle of non-refoulement without any further scrutiny regarding the real situation. Furthermore, the Council of State proceeded to interpret the notion of “international protection” as defined in the Geneva Convention of 1951, which is the basic requirement for a country to be considered as safe according to the EU legislation, and concluded that the ratification of the Convention is not required for the above criterion to be met. Lastly, the Council of State considered that the temporary protection status in the case of mass influx of Syrian refugees into Turkey is comparable to refugee status, despite the fact that it can be lifted at any time without ensuring individual access to asylum procedures or to at least an appeal against refoulement and without guaranteeing a series of other rights.

“Refugee Support Aegean”, as well as other organizations, has challenged these practices deriving from the “deal”, which violate the legal framework for the protection of refugees, before national and international courts.

J.B., a Syrian Armenian Christian at risk of deportation to Turkey

A Syrian Armenian Christian refugee at risk of deportation to Turkey

J.B., a Syrian Christian of Armenian origin, arrived on Lesvos 47 days after the infamous EU-Turkey Joint Statement (‘deal’) came into effect. J.B. lived for about a year in Turkey under the precarious ‘temporary protection’ regime without access to lawful work and housing at risk of arbitrary refoulement to Syria. During his stay in Turkey, he was exploited and intimidated. And J.B. had to conceal his religious and ethnic identity for safety reasons. “There is no real protection for Syrian refugees in Turkey”, he said to us.

Three days after his arrival, he was subjected to first reception and identification procedures in Moria hotspot. Despite claiming asylum, he was issued with a deportation order. A few days later – on 13 May 2016 – J.B.’s claim was registered with the Greek Asylum Service and he was interviewed by an (European Asylum Support Office)EASO caseworker. Following a surprisingly quick ‘fast track’ procedure, J.B. saw his claim being rejected as inadmissible at both first and second instance in less than twenty days. The ground for rejection was that Turkey was considered a ‘safe third country’ for him.

J.B.’s case was one out of the two cases that the former Appeals Committees concluded that Turkey is a ‘safe country’ for the individual Syrian applicants. Until that point, the former Appeals Committees had overturned all the first instance decisions deeming asylum applications inadmissible and considered that the system of international protection in Turkey is not in line with international standards.

On the evening of June 3, 2016, ‘Refugee Support Aegean’ lawyers met J.B. in Mytilene police station where he was detained in view of his readmission to Turkey in implementation of the EU-Turkey ‘deal’. J.B., at a loss to understand what had happened, asked repeatedly ”why, why me, what have I done?”. He later explained “I was living in the hotspot. That morning I was called by the speakers and was told to go to the Asylum office. When I got there, no one explained to me what was happening. I thought it was normal (procedure). But from there I was transferred to the police station. And found myself detained in a cell less than 10 m2 . I could not take even my clothes with me. I was in shock”.

As J.B. was at imminent risk of readmission to Turkey, RSA lawyers immediately lodged all available domestic remedies against the rejection of his asylum claim as well as against the decision ordering his readmission to Turkey, requesting his release. JB He was held for fifty days in degrading conditions in Mytilene police station. During his detention J.B., had lost contact with his family and suffered from tremendous nightmares, headaches and panic attacks. Once, he collapsed and was taken to the local hospital. JB He repeatedly told RSA ”I am not a human any more, I cannot sleep, Ι have nightmares day and night, I cannot stand on my feet”.

Greek Administrative Courts rejected J.B.’s appeals challenging his asylum rejection and the decision ordering his deportation to Turkey. His case is now pending before the European Court of Human Rights. JB he is still at risk of readmission. 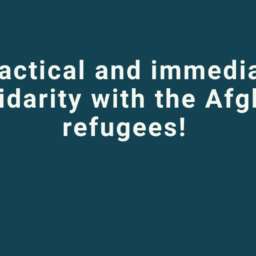