Return to the main page

Koutsochero camp is situated 20km away from the city of Larissa. The camp was created in the former Efthimiopoulou military base and opened in 20 March 2016. Its reported original capacity was for 1.300 and it had 300 tents.[1] It was closed on 28 June 2016, following protests by residents who then got transferred to Kipselochori site.[2]

Five months later, on 23 November 2016[3], Koutsochero reopened its gates. Since April 2018, the numbers of residents have been increasing steadily. In summer 2018, another 70 prefabs[4] were placed in the camp in order to host around 500 new arrivals. In September 2018, the camp hosted over 1.423 individuals[5] and its official capacity was 1.681[6]. Koutsochero is one of the largest but also most remote refugee camps in mainland Greece. As of September 2018, it hosted a high percentage of men (53%).[7]

The camp is situated in a valley between two hills. The barren countryside scenery is marked by the futuristic white prefabs set up in rows. There is the “old camp” with one-room prefabs and the “new camp” with two-room prefabs. In the latter, two families share one prefab. On the front, there is a police checkpoint and a bus station next to a parking area before one reaches the highway. Crossing to the other side, one has to walk between 15 and 20 minutes through the fields to reach the nearby village Mandra, which has one supermarket and a kiosk.

The Greek Army is responsible for site management and DRC provides site management support.[8] DRC is also providing legal information sessions, individual legal counselling and representation[9]. Furthermore, the organisation is involved in the provision of non-formal education for school aged children, youth and adults. At the time of RSA’s research in August 2018, EODY was tasked with providing primary health care to the camp’s residents as well as the identification of those vulnerable. However, there was only one army doctor seeing residents during weekday mornings. According to the protection monitoring tool of UNHCR in September 2018, people with special needs were not being identified in a timely manner and referred to services and there were no special services for victims of torture.[10] During the period of RSA’s research, services provided in the camp were limited (i.e. legal aid and language lessons). As of September 2018, less than 60 % of the children living in the camp attended formal education.[11]

Protests started in Koutsochero shortly after the arrival of the first groups of residents in 2016. They demanded to be transferred in better places and denounced the bad living conditions.[12] In the past three years, protests continued over specific problems such as delays in loading Cash-Cards[13] and the disappearance of a 12-year-old girl[14]. The substandard living conditions also remained a major source of anger.[15]

Interviewees spoke about their concerns about security in the camp including fights between residents and reported criminality and drug / alcohol abuse.

“As a lone mother I feel afraid when the men are getting drunk and when they fight. Once they burnt some containers down. This is not a life here. I feel that at any time a stranger could enter my container. Every moment I feel fear. Fear of the other next door, who I don’t know. Fear from all these single men living around us. I feel afraid for the health of my son who is ill and we are far from the hospitals. I feel afraid to get stuck here. … I tell you what I feel every night before I sleep. My feeling is being scared, being alone, hugging my son with my blanket in one room where there is no security, no people to solve problems, and I am missing my husband.”

Arwa R.* (27)[16] Kurdish from Syria, Koutsochero camp
The single mother lives with her ill 6-year-old boy in Koutsochero. She has applied for family reunification with her husband in Germany.

“In Koutsochero … we are all in a very bad situation. … The new ones all have their interviews in 2020 and 2021. The old ones who are recognized have to be out soon. Also, a lot of people are rejected … A lot of people [transferred from the islands] are ill. The mental health of people here is worse. First of all because they were already psychological sick, because of their problems and also because the fights and problems between refugees.”

Distance from services and hospitals situated in the city of Larissa were another cause of worry and some interviewees reported that in cases of emergency, the ambulance would usually arrive very late. In addition, transport costs placed a significant burden to the stretched finances of those living in this remote camp. Often residents have to travel to Athens or Thessaloniki to access social services and to Larissa to buy affordable food. They said that when they visit Athens or Thessaloniki they are often obliged to stay overnight and sleep rough as they cannot afford accommodation.

“I was 7 months pregnant when we arrived on Lesvos… .

Two weeks ago, we were finally transferred to Koutsochero camp. It is better than Lesvos, but we are far from the city and we have to wait for a long time for our interview. Our asylum appointment was scheduled for the summer of 2020 in Athens.

We have one caravan [prefab] for our family now. It is in the new section of the camp. They have not yet connected well the water and electricity lines. Lights were placed here just two days ago. The water from the tap is dirty. We cannot drink it. When it rains all the floor turns into mud and we cannot move around. Behind us, there is a mine and at times when we can hear the explosions, I wince.

I stay always inside the house because I am scared to move around the camp. There are many people living here and we don’t know who is a friend and who is an enemy. There are also many men. The people who live here come from all over Greece: from other camps like Diavata or Vaghiochori and from the islands, like us. At night, it is very dark. I see bad dreams.

We had a Cash-Card from Lesbos of 90 Euro per adult, but we haven’t received money yet since we moved. And there is no catering here. My husband needs to get an operation for his eyes.

We escaped from hell in Syria and now we are in nowhere. I don’t trust life here. But we have no choice… .”

Arwa R.* (27) lives in Koutsochero with her 6-year-old boy. The Kurdish Syrian has applied to reunify with her husband in Germany. She arrived in Greece in February 2018.

“When we arrived in Greece we got arrested. They brought us to a closed camp [Fylakio] where we stayed for 15 days. We were released with a white paper for six months but we said we wanted to apply for asylum. I registered my asylum then in Thessaloniki, in March 2018.

In Koutsochero, I live in the old side of the camp … (where) the containers have all just one room. In the new side they have two rooms, but there are also containers that two families have to share.

As a lone mother I feel afraid when the men are getting drunk and when they fight. Once they burnt some containers down. This is not a life here. I feel that at any time a stranger could enter my container. Every moment I feel fear. Fear of the other next door, who I don’t know. Fear from all these single men living around us. I feel afraid for the health of my son who is ill and we are far from the hospitals. I feel afraid to get stuck here.”

By the end of February 2019, Arwa was desperate. She told us that her family reunification has not yet been sent to the German authorities. She still suffers from the camp’s conditions:

“Sometimes it is very calm, sometimes there are screams and noises. Then I just lock the door and wait. Nothing changed. My son is still ill. …. I tell you what I feel every night before I sleep. My feeling is being scared, being alone, hugging my son with my blanket in one room where there is no security, no people to solve problems, and I am missing my husband.”

Return to the main page 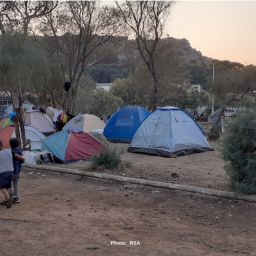