JOINT STATEMENT ON THE EXTRADITION CASE OF TURGUT KAYA

In Decision No. 912/2018, Greece’s Supreme Court 6th Section ruled in favour of the extradition of Turgut Kaya, a political dissident, journalist and historian to Turkey. Turgut Kaya has already been subjected to political persecution in Turkey as well as torture and inhuman and degrading treatment by the Turkish authorities on account of his political beliefs and his pro-Kurdish activities.

This is an unprecedented decision contrary to the jurisprudence of Greek courts – including the Supreme Court –  on similar extradition cases concerning other political dissidents to the Turkish regime with public political actions indicted in Turkey on the basis of anti-terror legislation as members of an illegal ‘terrorist’ group.   It should also be underlined that according to International and European organisations and international human rights NGOs, political dissidents in Turkey are persecuted systematically, mainly by being indicted and convicted on the basis of anti-terrorism legislation as members of illegal organizations.

In this decision, the Supreme Court did not proceed with a thorough review of the case and omitted to examine, in substance, all the presented crucial arguments of Turgut Kaya even if it was obliged to do so considering the importance of the rights at stake (life, freedom from torture, liberty and fair trial).

The Supreme Court used insufficient and incorrect reasoning and concluded that Turgut Kaya’s extradition is not requested by Turkey for the purpose of his political persecution. This conclusion was reached despite evidence presented before the Court including a witness testimony and documents proving Kaya’s political activities since 1990, public expression of his left-wing and pro-Kurdish ideas (also through his journalism and writing) as well as him being targeted and persecuted by the Turkish authorities.

In particular, Kaya claimed that ‘in his status as a journalist, he writes in a paper opposing the current Turkish regime and as a result of this status and the free opinions expressed through his articles, he will be subjected to prosecutions as well as torture’. In relation to his claim, the Supreme Court judged that Kaya invoked his journalist status for the first time at second instance. The judgment mentions that during the first instance proceedings before the Thrace Council of Appeals’ Judges, Kaya initially ‘declared that he is a political person. He is active in politics since the 1990s and he is a wanted person’.

It is worth pointing out that during the hearing the Supreme Court Prosecutor said that Kaya presented belatedly his status as a journalist ‘in order to benefit’ from the persecutions that currently journalists face in Turkey even though his arguments have been proved by a witness testimony as well as multiple articles in pro-Kurdish newspapers in Turkey since 2000 and with a relevant attestation provided by a publishing house.

Further, the Supreme Court did not examine Kaya’s claim that the final judgment that convicts him in Turkey and on the basis of which Turkey requests his extradition, constitutes itself a type of political persecution and was the result of an unfair trial. The Court also kelp silent in relation to significant generality in the extradition warrant.

As invoked by Kaya before the Court, since 2006 and even earlier and before the attempted coup Amnesty International and the Council of Europe have documented in their reports on Turkey:  excessively wide implementation of the anti-terrorism legislation; adoption of repression measures against those criticising the government policy; use of testimonies provided during torture during trials: and that there are no guarantees of fair trial.

In its ruling, the Supreme Court either did not examine crucial claims by the Turkish refugee or rejected others ‘as belatedly invoked’ (i.e. invoked for the first time before the Supreme Court and not the First Instance Court), despite the fact that these claims have been proved during the hearing.  The Court showed an unexplained procedural adherence in contrast with its previous and recent case law.

It should be noted that the extradition request was heard by the First Instance Court in Thrace after it rejected Kaya’s lawful and substantive request to postpone the hearing in order to prepare his file and defence. As a result, Kaya was deprived from the ability to present supporting evidence for his case.  The presentation of this evidence became possible before the Supreme Court. However, the later either did not take this evidence into account or rejected it as ‘invoked belatedly’.

An illustrative point of the ruling’s incorrect reasoning is that the Supreme Court did not even assesse the admittance by Turkey of a breach of Article 5 of the European Convention on Human Rights (ECHR) following an application by Kaya for unlawful pre-trial detention. This violation took place while Kaya was in pre-trial detention in Turkey for six years. Following his application before the European Court of Human Rights, Turkey admitted the breach, proposed a friendly settlement and compensated Kaya.  This fact was assessed by the Supreme Court as evidence supporting Kaya’s extradition (!). Attention should be drawn to the fact that Kaya was released from pre-trial detention because Turkey admitted the breach of the Convention. This is accepted by the Supreme Court’s relevant ruling but it is also misinterpreted completely.

It should be noted that Turkey is the country with the highest number of convictions by the European Court regarding violations of the European Convention on Human Rights. In addition, Turkey has suspended the Convention following the attempted coup.

The Greek Council for Refugees and Refugee Support Aegean/ProAsyl represented the Turkish refugee before the Supreme Court and will continue to provide legal assistance. A possible extradition to Turkey will constitute a blatant breach of the principle of non-refoulement and the European Convention of Human Rights.

We call the Minister of Justice to reject the extradition request on the basis of the above grounds and also because of Kaya’s status as an asylum seeker. According to the Greek legislation and jurisprudence, such status prevents Turgut Kaya’s extradition. We also call for Kaya to be released immediately from custody.

Between 10-11 May 2018, the Last Rights Project held an historic meeting on Lesvos island, to discuss and agree a new declaration of rights for all… 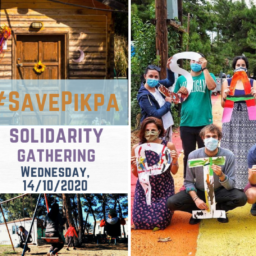