Mohammedi Naim has been living in Greece for the past sixteen years and for the last four works as a Farsi interpreter for Refugee Support Aegean (RSA). He belongs to the Hazara ethnic group and was born and raised in the Afghan district of Jaghori, in Ghazni province. The majority of the residents in the province are Hazaras. He has just returned from a telephone booth in the centre of Mytilene (Lesvos) where he was trying to find out news of his family. They were forced in a night to become refugees and abandon Jaghori. The area was until recently one of the safest and peaceful places in Afghanistan.

In recent days, Jaghori, Malistan and Uruzgan have been under attack by the Taliban. In this interview, Mohammedi describes his deep worry for the developments in the region, questions the stance of EU countries that consider Afghanistan as a safe country and speaks about the efforts of the Afghan diaspora to support the persecuted Hazara ethnic group.

The Hazaras as minority have been subjected and continue to face systematic discrimination, violence and massacres as a result of their ethnic and religious identity[1]. In recent years, the Hazaras and other ethnic groups in Afghanistan have been subjected to lethal attacks by insurgent groups linked with ISIS and the Taliban. Hundreds of Hazaras have lost their lives or been injured following suicide bombings such as that of last August when 48 Hazara students were killed and many injured in a suicide bombing in Kabul.

What is the situation at the moment in the area?

For the past ten days, Jaghori is being continuously attacked by Taliban fighter groups. Two of my sisters and two uncles live in the area. My relatives and people who live in the same village took very few of their possessions, locked their homes, got into their cars or trucks and headed for the mountains in order to reach Kabul and save themselves. It will take then ten days to complete a journey that usually takes eight hours because of the attacks and insecurity in the district. One of my sisters, her six children and other relatives are at the moment in a small village in the mountains. She has a very young baby and she did not even manage to pack a blanket to keep the baby warm. The residents of the village where they temporarily stay, give them food and look after them. I had lost trace of my other sister for few days. I just found out from a friend that she also managed to flee but I do not yet know where she is. We are very worried. We do not know if tomorrow our loved ones will still be alive.

There are fears that if the Taliban get control of Jaghori and two other areas where the Hazaras live (Malistan and Uzurgan), there will be a lot of destruction and massacres of civilians. What is the protection provided by the central government and by the foreign powers present in the area?

The state has already promised to send troops. It sent commandos and as we have been informed 27 to 30 have already been killed by the Taliban. There is a military base a kilometre away from my city, but they don’t do something to help the people. It is a forgotten area. There is not even a tarmac road to link it with Ghazni – the region’s capital – that is three and half hours away. The state has let people in God’s mercy. The President has said that he will send help but so far people resist without any assistance. They have send their wives and children in areas in the surrounding mountains and they have stayed in their areas to defend their homes. At this moment, no one knows the exact death toll, the number of those injured or being taken hostage following the attacks by the Taliban in recent days.

What do you think is the reason that your area is being attacked?

For months now, the Taliban had issued warnings and threats to the local population to cooperate with them against the central government but following the efforts of the group’s elders, the attack was prevented. Few days ago, the Taliban suddenly launched an attack at 3 am. The area is very important for them because of its strategic position. It has a reputation for the level of education and the children’s education as many relatives of the inhabitants live abroad and support the area financially. Even during the civil war, schools remained open. The Afghan diaspora sends money for the teachers to be paid and for the schools to remain open. The inhabitants have lived similar situations before the American invasion and know how life was under the Taliban rule. It is something they do not want to experience again.

Figures from a NATO mission report indicate that the Taliban is stronger now than at any time since the war began in 2001. In addition, according to UNHCR Kabul is not a safe area for someone to be returned. What is your own experience?

Few weeks ago, I was in Kabul. My relatives came there to see me as if I travelled back to Jaghori my life would be in danger. But even in Kabul, I did not feel safe. Danger lurks everywhere in this country. Your do not know who you work with, if there are landmines, when another suicide bombing will happen, when would the Americans launch an operation. I do not understand what countries such as Germany and Norway as well as others think when they return back to Afghanistan refugees who managed to reach safety and ask as for protection. (I do not understand what they think) and support that Afghanistan is safe now. What safety? We estimate at currently 70 % of the country is controlled by the Taliban.

How do you feel at the moment as you follow what happens from Greece?

It is the worse feeling that someone can have when he/she has the sense that he/she is not able to help. There ae times that you wish it is a dream and not reality. If you see someone who falls in the street you can help him/her to stand up. Now we cannot do anything. We the Afghans of the diaspora have established groups in various countries so we collect financial support for the poor families who will manage to reach Kabul (even there it would be hell) so we support them in their basic needs and to find a temporary shelter. We also try to awaken the world public opinion for the attacks against the Hazaras through information and protests in large European cities.

Note:
Hazaras living in Greece announced an exceptional strike of Afghans in the Attika region for Tuesday, 13 November 2018 in the context of the protest for the genocide that takes place in Afghanistan (read more: https://www.facebook.com/events/543915892722770/). 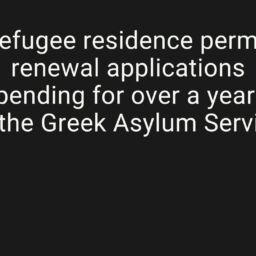 Refugees receiving protection in Greece and those returned thereto from other European countries continue to face prolonged delays in the renewal of their residence permits.

08 May 2018
PUSH BACKS AT EVROS BORDERS: A DISREGARD FOR HUMAN LIFE AND LEGALITY