A Syrian refugee, a Christian of Armenian origin, who lived for about a year in Turkey under the precarious ‘temporary protection’ regime without access to lawful work and housing and at risk of losing his temporary status and be deported to Syria has been under risk of readmission to Turkey in implementation of the EU-Turkey Joint statement. During his stay in Turkey, B.J. had to conceal his religious and ethnic identity for fear of being discriminated. The applicant entered Greece after the Implementation of the EU-Turkey Joint Statement and applied for international protection. In June 2016. The competent Greek authorities issued a final decision on his request ruling his application as inadmissible considering Turkey as a safe third country for him.

This decision of the Greek Authorities was one out of two cases that Turkey was considered to be a safe third country by the “previous” Appeals Boards (the Minister of Migration has since sidelined the Appeal Committees and put a new structure in place, in a move criticized widely as direct political intervention in the independent asylum process). The decision was based on the EU-Turkey Joint Statement, and on correspondence between the authorities with European Commission and  UNHCR, without substantial examination of the actual situation of Syrian refugees and not taking in consideration the particular circumstances for members of specific minorities, like the applicant, in Turkey.

RSPA’s Lawyers, members of Refugee Support Aegean (RSA)  found the detainee in the Police station while at risk of readmission.  RSA lawyers  lodged all available domestic remedies against the rejection of his asylum claim as inadmissible as well as against the decision ordering his readmission to Turkey, requesting his release. They also requested to refer a question to the Court of Justice of the European Union (CJEU) for a preliminary ruling on the interpretation of the wording “international protection according to the Geneva Convention”.

The court subsequently communicated to the Greek authorities the following questions that shall be investigated:

A. If the procedure followed in the case of B.J. was in accordance with Article 3 of the European Convention on Human Rights (ECHR) in conjunction with Article 13 of the ECHR (right to an effective remedy),

B. If, in the event of his return to Turkey, the conditions of detention and reception (living and residing) constitute degrading treatment according to Article 3 of the ECHR, particularly in relation to his ethnic origin, religion and his state of health.

C. If his detention in the police station of Mytilini for approximately one and a half months constitutes a violation of Article 3 of the ECHR

The communication of this case by  ECHR in priority is indicative of the importance given by the court. Furthermore, it shall be noted that to date it is the first case concerning the implementation of the EU-Turkey Joint Statement on Syrian citizens to be discussed by the European Court of Human Rights.

Last but not least, it is crucial to  remind that the two cases of Syrian citizens – one of whom is represented and supported by RSA lawyers – rejected as “unacceptable”  considering  Turkey a “safe third country”  are still pending before the Greek Council of State.

Refugees trapped on Kos: An unspeakable crisis in reception conditions
31 Oct 2019
The right to asylum in the context of “instrumentalisation” – Lessons from Greece 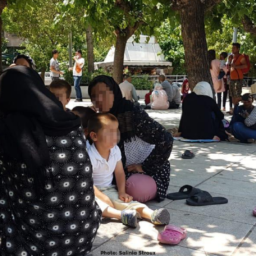