WHAT REMAINS TO BE DECIDED ARE ITS ACCOMPANYING MEASURES

On Tuesday, 20.12.2022, the interrogation of Panayote Dimitras took place, following criminal charges brought against him for “setting up a criminal organisation with the purpose of facilitating the illegal entry and stay in Greece of third country nationals”. Following the conclusion of the interrogation, the Investigating Magistrate and the Prosecutor agreed on imposing a prohibition on involvement with the Greek Helsinki Monitor, a civil society organisation of which he is a founding and core member since 1993, while they disagreed on the remaining measures that will be accompanying this prohibition. These are to be decided by the competent Judicial Council.

Specifically, the Prosecutor additionally proposed house arrest with permitted exit only for medical visits, while the Investigating Magistrate proposed a travel ban, coupled with reporting to a police station on the 1st and 15th of each month, and a 10,000 euro bail.

These proposals exhaust the limits of harshness and severity against a man known for his work in defending human rights in Greece for many decades. They also give pause in their fury against Human Rights Defenders at a critical juncture of daily information on new victims of systematic and illegal forced returns of refugees and migrants at the borders of our country.

We stress that house arrest is equivalent to detention (deprivation of physical liberty), while the prohibition on involvement with the organisation he has founded and remains a part of, with notable activity and participation in all international human rights, is contrary to the Greek Constitution, the ECHR and all national and international provisions safeguarding freedom of expression, personal development, as well as the freedom of association. Any other alternatives to pre-trial detention are not justifiable given that the residence and presence of the person concerned and known.

Prohibition on involvement and participation in a recognised association or union is a measure that affects the sphere of a person’s convictions and beliefs, while interest in the common good and solidarity, as recognised positive social characteristics, cannot constitute an illegal activity, in order for involvement therewith to be prohibited. Otherwise, all instruments of international and national institutions and organisations that have denounced similar incidents would have to be investigated as criminal organisations (since they have a structure, hierarchy, duration, roles).

We remain firmly on the side of supporting those who defend human rights, especially those of refugees and migrants.

“ARSIS Association for the Social Support of Youth (http:/arsis.gr)

Lawyers for the Rights of Refugees and Migrants (http:/www.omadadikigorwn.blogspot.com)

Network of Social Support for Refugees and Migrants (http://migrant.diktio.org)

World without Wars and Violence (https://www.kosmosxorispolemous.gr) 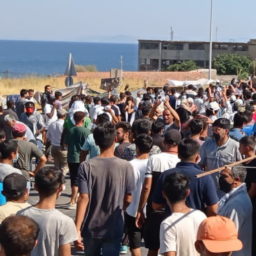