Statistics on returns from Greece in 2020: Key observations

This note provides a brief summary of observations from Refugee Support Aegean (RSA) on official statistics on returns from Greece, made available by the Hellenic Police.

1. In the first ten months of 2020, Greece recorded 5,793 returns of irregularly staying persons, including third-country nationals and EU citizens. Of those:

2. The Greek Government appears to have reframed its original target of 10,000 returns to Turkey (explicitly compared to 1,806 under the previous Government) by the end of 2020, to 10,000 “departures”. Such a shift may be inferred by the emergence of statistical references to “departures” in the Ministry of Migration and Asylum July 2020 report and subsequent reports. The Ministry calculates “departures” as encompassing returns, outgoing transfers under the Dublin Regulation, and relocation transfers.

3. The Ministry of Migration and Asylum monthly report on the Greek asylum system refer to a “positive net balance of departures / arrivals” in October 2020. As of the end of October, the Ministry reported a total of 8,746 departures from Greece, of which 5,793 were returns, 1,502 were Dublin transfers and 1,451 were relocations of asylum seekers and beneficiaries of international protection under different voluntary schemes.

4. Almost half of the total number of returns (49.7%) in 2020 concern nationals of Albania. Out of a total of 2,877 returned Albanian nationals, 651 were returned to Albania under simplified readmission procedures.
According to the latest available official statistics, referring to the first half of the year, the main nationalities of persons crossing from Turkey into Greece (Evros and the Eastern Aegean islands) are Afghanistan (36.8%), Syria (19.1%), Turkey (12%) and the Democratic Republic of Congo (6.7%). The number of returns of nationals of said countries in the first ten months of 2020 was 181 for Afghanistan (3% of the total), 66 for Syria (1.1%), 161 for Turkey (2.8%) and 12 for the Democratic Republic of Congo (0.2%).
In light of official Hellenic Police return data, the correlation drawn by the Ministry of Migration and Asylum between irregular arrivals via Evros and the Eastern Aegean islands, on the one hand, and returns, on the other, is thus not supported by statistics.

5. The COVID-19 pandemic has had an impact on all types of returns, with a notable drop in figures during the months of April and May 2020. Voluntary departure has been the least affected category of returns.

6. Returns to Turkey under the EU-Turkey deal have been indefinitely suspended since 5 March 2020. The suspension remains in force at the time of writing. In addition, as highlighted by the European Commission, the bilateral Greece-Turkey readmission agreement remains suspended on the part of Turkey, while the third-country national clause of the EU-Turkey Readmission Agreement is not applied by Turkey to date. The ongoing insistence of the Greek authorities on the EU-Turkey deal amounts to a conscious policy choice of confinement of people in inhuman conditions on the islands, despite a demonstrable lack of prospect of removal to Turkey.

Table 1: Breakdown of returns by type of return

The updated report on the situation of beneficiaries of international protection in Greece, published today by RSA and Stiftung PRO ASYL, highlights chronic legal and practical barriers excluding them from the basic documents and socio-economic rights needed to rebuild their lives. 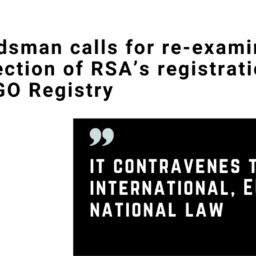 Despite facilities in Kos have already reached maximum capacity due to increased arrivals from Turkey, the few last weeks authorities…