Justice for the shipwrecked in Farmakonisi - Invitation to Press Conference

Network of Social Support to Refugees and Migrants

Group of Lawyers for the Rights of Refugees and Migrants

at the Bar Association of Athens (Akadimias 60)

Regarding yesterday’s judgment of the European Court of Human Rights (ECtHR) in Safi and Others v Greece, App No 5418/15, 7.7.2022, granting the application of 14 refugees supported by our organisations on violation of articles 2 (right to life) and 3 (prohibition of torture, inhuman and degrading treatment) of the European Convention on Human Rights. The Court held the Greek authorities responsible for the shipwreck that took place on Farmakonisi on 20 January 2014 following the involvement of a Coast Guard vessel, which led to the tragic drowning of eight children and three women, refugees from Afghanistan.

The shipwreck survivors, including relatives of victims, appealed before the ECtHR after exhausting remedies in the Greek justice system. The Piraeus Naval Court Prosecutor archived the case and closed the file of judicial investigations into Coast Guard responsibility. The Review Court Prosecutor rapidly upheld this decision. A central claim in the Piraeus Naval Court Prosecutor’s decision to archive the case was that push backs do not occur in Greece. This case had also been thoroughly debated by the Greek Parliament in a special meeting on 29 January 2014, given that evidence demonstrated that a “border control” and not a “rescue operation” had been carried out in the area of Farmakonisi on that night, leading to 11 deaths.

Yesterday’s judgment from the ECtHR comes eight years following the tragic incident. It vindicates the victims by awarding compensation from the Greek State and brings to light an issue systematically concealed in public discourse: push backs and systematic deterrence practices which put lives at risk on a daily basis in Evros and the Aegean.

The Strasbourg Court found a violation of the right to life, both on its procedural limb due to the authorities’ failure to responsibly and effectively investigate such a significant case, and on its substantive limb, stemming from omission of those actions that they should and could have taken to protect human lives and prevent the tragic incident. The Court also held that Coast Guard officers had inflicted degrading and inhuman treatment against shipwreck survivors that night.

Eleni Spathana, Lawyer, Group of Lawyers for the Rights of Refugees and Migrants 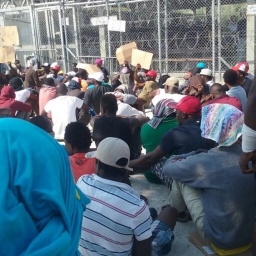